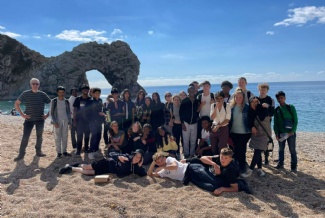 On Friday 16th September 2022, a group of 34 Year 11 students, embarked on an exciting field trip, staying in the lovely town of Swanage for three days; an adventure nobody would ever forget.

Day 1: Friday 16th September –  Gathering outside reception at 7:30 am, we piled onto the minibuses. Rumbling across the motorway in our bumping minibuses, every child on their headphones (teenagers, am I right?!) A couple of hours later, we arrived at a pit stop, where we filled our hungry stomachs, once again embarking on the road, chatting more, until we arrived at the sea, splendid in front of us. 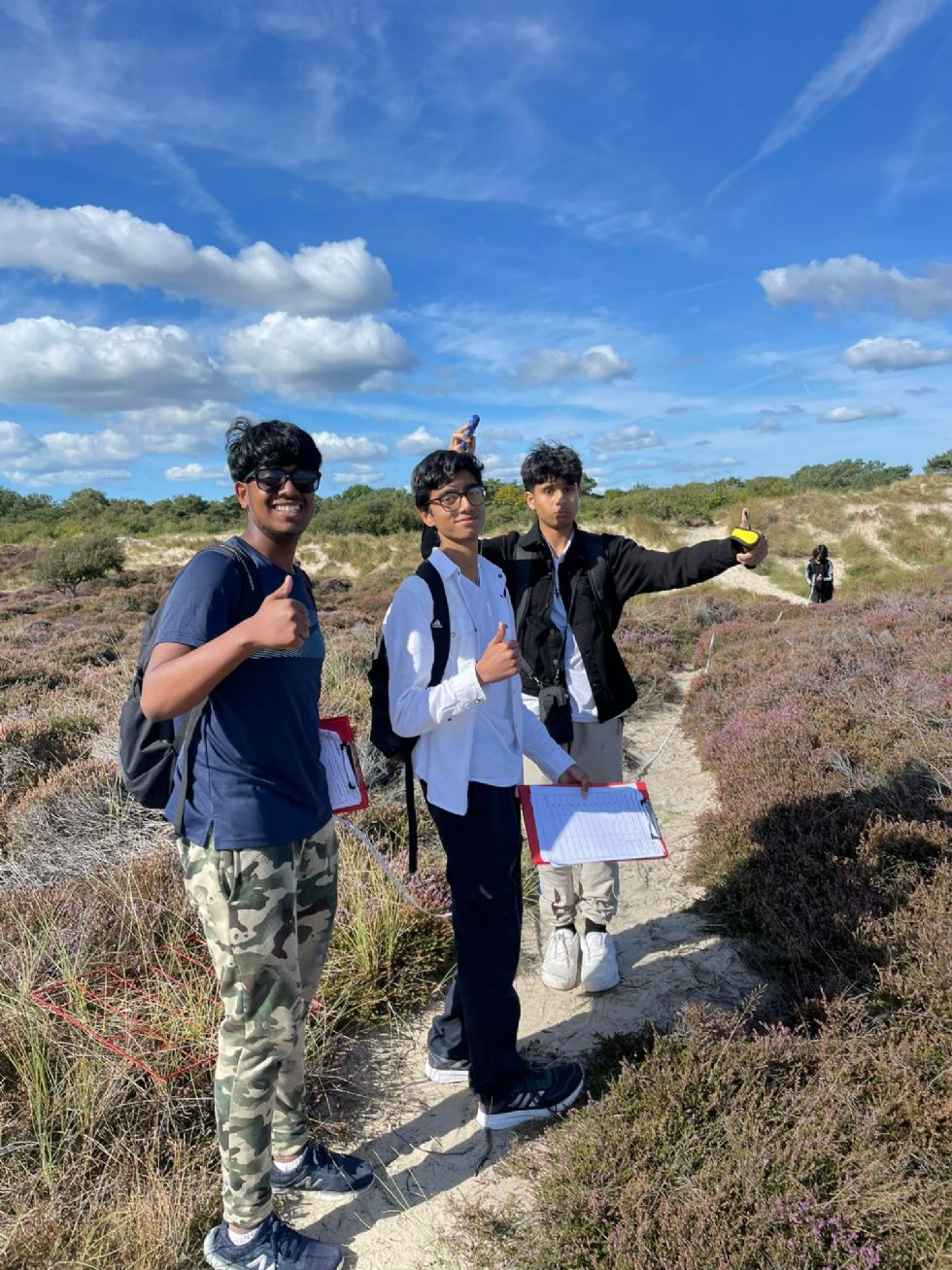 Here, we took a ferry across the calm blue water, for about five minutes and travelled again until we reached Shell Beach, where everyone went wild at the sight of sand and sea. From there, we went to Winspit Quarry. My breath was taken away by the magnificent view of the ocean. I was also fascinated by the story of the old, abandoned quarry and, of course, the rock formations (thank you Mr Wright for explaining them!)

Finally, us weary travellers arrived at the youth hostel, tired and worn out, to find we had really nice rooms, and a chance to explore the town at night following a lesson in the classroom. Here, I experienced the highlight of the trip - glorious freedom in the night air of the quaint town of Swanage. Every student rushed down to the town as soon as we were let out. I was enchanted by the lit-up streets. And then I saw perhaps the most beautiful thing of the whole trip - the sea at night. 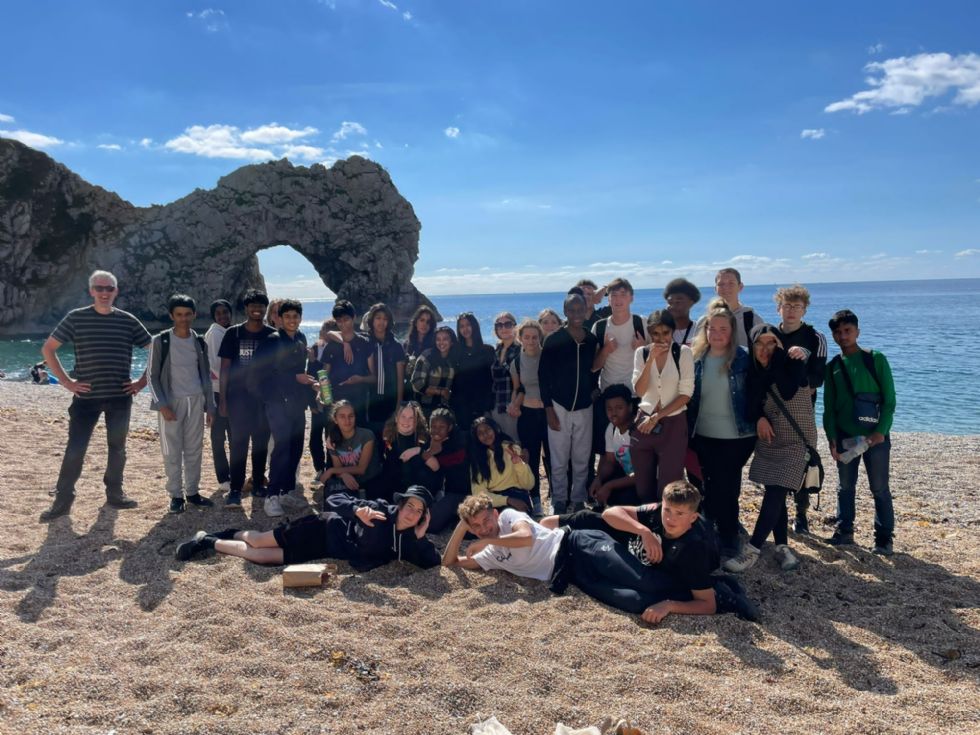 I had never before seen something so pitch black, so quiet, and so enchanting. I could hear the quiet swash of the waves, like a magical lullaby, and looking up in wonder, I saw the sky filled with thousands upon thousands of stars. It took my breath away; it made me want to stay there forever. I knew I would never forget it.

Tearing myself away, we carried on exploring the town. After an amazing hour in the town, looking into a closed library and having fun in the arcade, everyone piled into their rooms, where, of course, we talked for hours until the next day.

Day 2: Saturday 17th September:  We were awoken by the sound of knocking, and Mr Simpson telling us we had to get up. Groggily, we got dressed and made our way downstairs, eating a delicious breakfast which my friends would not stop talking about, before making our way to Knoll Beach. Here, we carried out bipolar surveys and questionnaires, measured wind speed and marram grass (marram grass is now a name no one will forget), and got into a pinecone war with Mr Wright.

Promptly after that, we headed to Old Harry Rocks, which we had heard so much about, and I felt a bubble of excitement to see the famous landform. After walking for a while up a steep incline, and along country roads lined with trees, the road thinned out to open fields. Soon, we saw the edge of cliffs, filled with hope that the trek was over, and then, finally Old Harry. 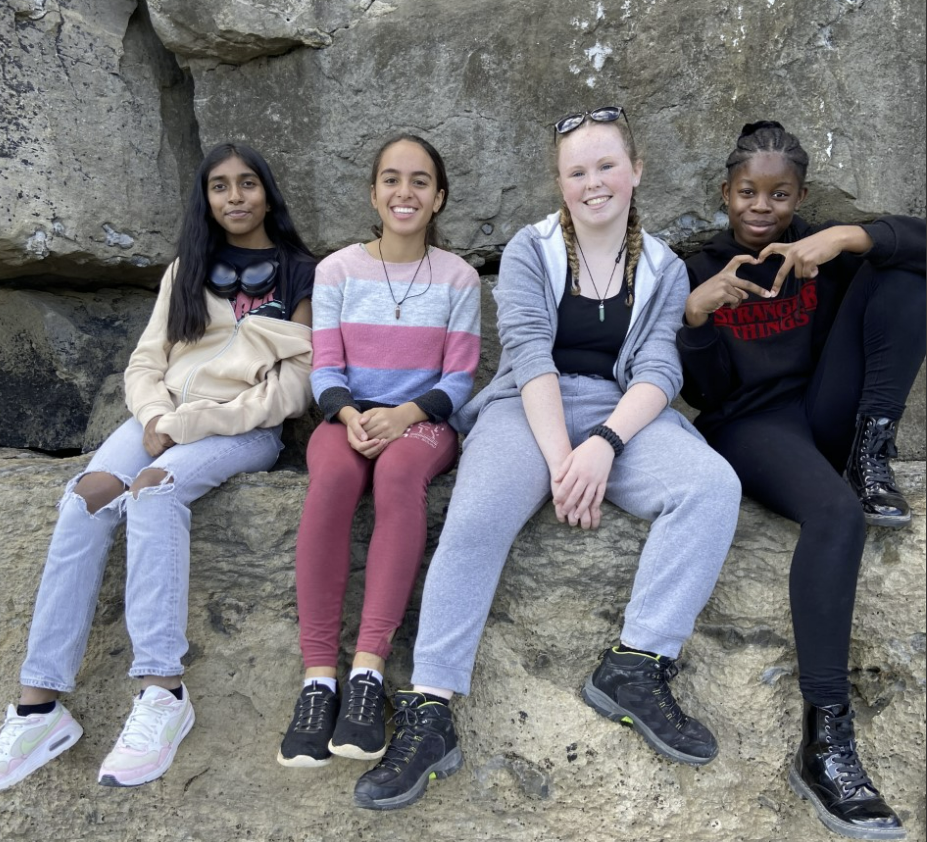 Standing on the cliff, I was gobsmacked by the magnificent view and how huge, and awe-inspiring Old Harry looked in real life. We gazed at the view for a few minutes and then everyone sat down, breathing sighs of relief, to sketch Old Harry. It was an incredibly peaceful and content moment. Soon we returned to Swanage, going down from the chalk cliffs to the Purbeck limestone The scenery was some of the most beautiful I have ever seen in my life. Reluctantly leaving it behind, (I think everyone was so tired I was the only one), we arrived at Swanage and enjoyed some free time. After the evening lesson, we ventured into the town again and this time it was even better. We all more or less knew where we were going and had more time to enjoy the exhilaration of night-time in Swanage. And then, as if planned for us: BOOM! Looking out to the sea, my friends and I saw a huge boat releasing dozens and dozens of fireworks into the sky, in a fantastic and incredibly loud display.  It was colourful , wonderful and exciting, and we all stopped immediately to watch it; eyes wide. It was like an exuberant goodbye.

Day 3: Sunday 18th September: Once again awoken by Mr Simpson, we rushed, almost late, to breakfast, everyone sad, as we knew we would soon have to leave our amazing holiday. But we barely had time to dwell on it as we all headed on the minibuses to Durdle Door. This is where we faced the hardest trek yet. I had never seen something so steep and difficult to walk up; everyone was breathing hard, everyone’s legs ached, and I felt as if I had run ten marathons. But it was worth it when we arrived, triumphant, to the top, gazing down at Durdle Door. 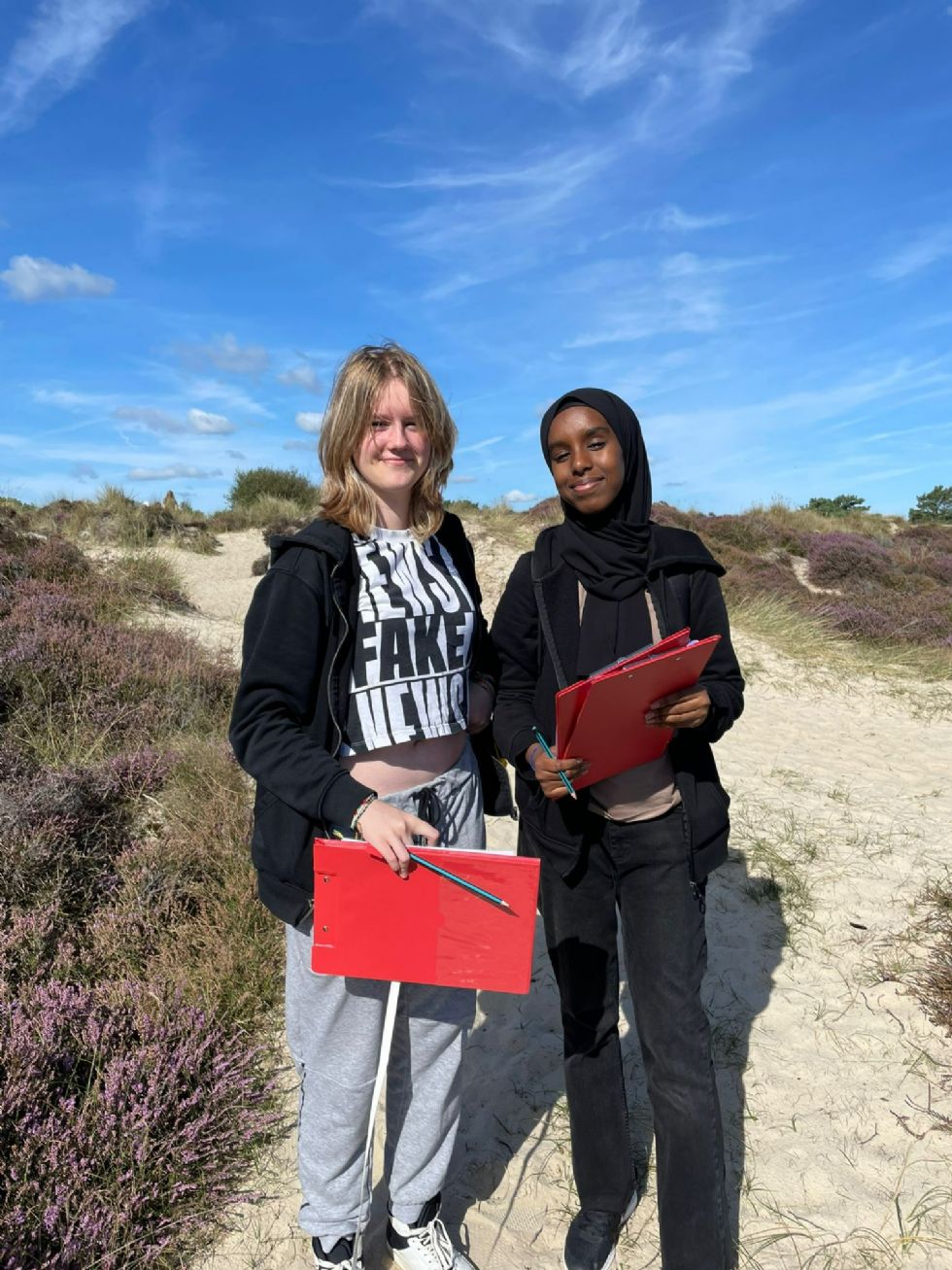 It was breath-taking. The ocean was a myriad of dark blues and enchanting turquoise, like I had never seen in England, and way below, I could see people swimming in the water, so far out I was in complete awe.

From here, we descended to a pebbly beach where Mr Wright taught us to skim rocks, and then to Durdle Door itself – a sight straight from a travel brochure, with its enormous, strangely-shaped arch. After that, we assumed the long hike again, where we were allowed some free time in the village of Lulworth. Most of the students bought ice cream - one of my favourite moments of the trip. Then, we ambled to Lulworth Cove, a picturesque place shaped like a perfect seashell. This is where we learnt about the differences between a bay and a cove! The whole time I just stared at it; the dramatic cliffs, the opening of the cove, the spotless beach, the boats. I did not want to forget it.

Finally, we all knew it was time to go. On the way back from the minibuses, we sang to an incredible amount of pop songs, almost killing my voice, but it was worth it. It made me feel a little less sad about leaving after having had the time of my life. Arriving back at the hostel, we packed our things. Everyone was sad to go. Then, we climbed into the minibuses, and headed back home. 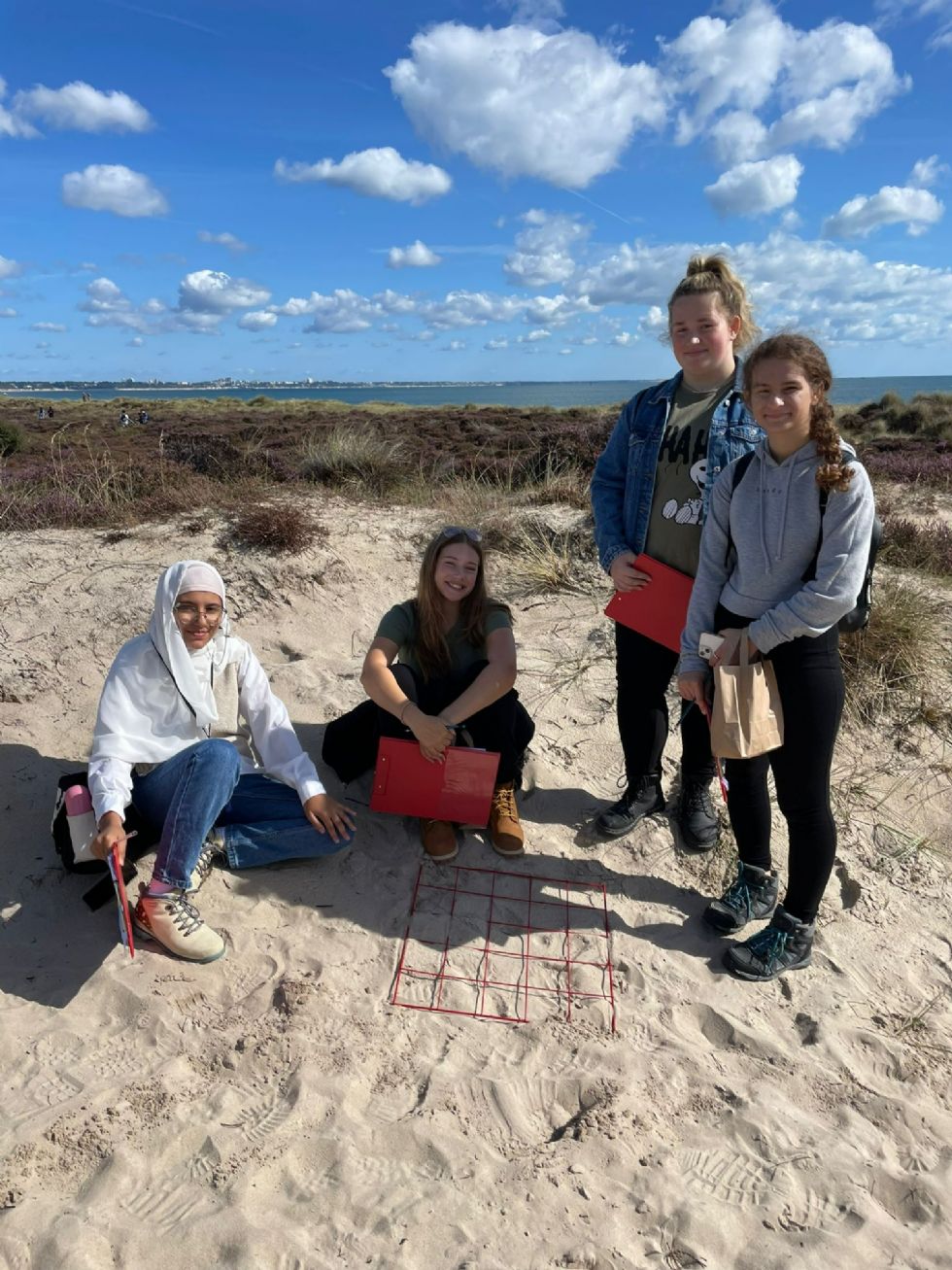 The trip to Swanage was an incredibly fun, fascinating, and new experience, during which I experienced the exhilaration of a holiday with my friends, and the fascination of learning about the geography of a beautiful area. On this trip, everyone learnt new things, made stronger relationships with their friends and teachers, and saw the natural beauty of Dorset. It was a trip no-one will forget any time soon. Thank you so much to the wonderful teachers who organised it: Ms Rockell, Mr Wright, Mrs Wright, and Mr Simpson. It was an amazing and incredibly well-organised trip, and your presence made it ten times more fun!