The Great Debate at The Natural History Museum 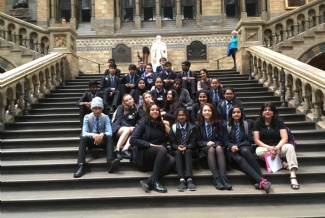 The students were introduced to the great debate of 1860 0n Darwin’s Theory of Natural selection.

Mrs Ul-Haq, Ms Santana and Mrs Kilroy accompanied a group of year 10 students to the Natural History Museum. Here they explored the exhibits and participated in a workshop.

The students were introduced to the great debate of 1860 0n Darwin’s Theory of Natural selection.

Darwin's theory of evolution by natural selection shook the religious and scientific world at that time. Through this workshop, the students discovered how, over time, this theory has become the accepted explanation for the diversity of life around us today.

The characters and events of this landmark debate were brought to life by an experienced Science Educator through a tour of selected specimens in Hintze Hall. The students saw how scientific knowledge develops over time and how evidence and peer review help support this process.

Split into teams, they engaged with the key arguments of Sir Richard Owen and Charles Darwin and used real specimens as evidence to support their own facilitated debate on evolution.

The students were enthusiastic and fully engaged in the debate. As expected, the Rooks Heath students displayed exemplary behaviour and everyone had a fantastic time.